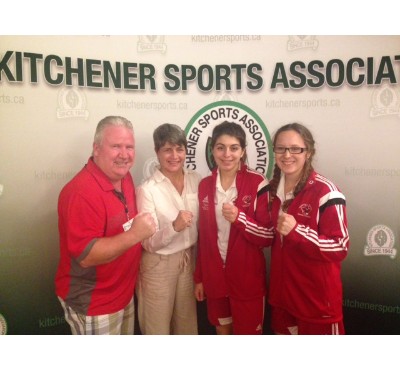 WRBA Boxers Tatianna Antunes and Katelyn Vanderlaan and the President Gary Draves were on hand to accept a donation from Jean Howitt, Chair of the Athlete of the Year Committee

The $500 donation was made possible by the Kitchener Sports Association

Both Tatiana and Kaitlyn are currently training hard for their upcoming trip to Ireland. Both boxers leave October 3 to compete at the 2016 ESKER Tournament. Over 300 boxers from countries including Ireland Scotland England Sweden Germany and the Netherlands will be attending.